I am going to be more organised this year... no really I am *wink*.

So here it is end of January and I have my Valentine Card for Hubs finished too ...WOOT!  My card was inspired by Julie Dinn from her blog post HERE! 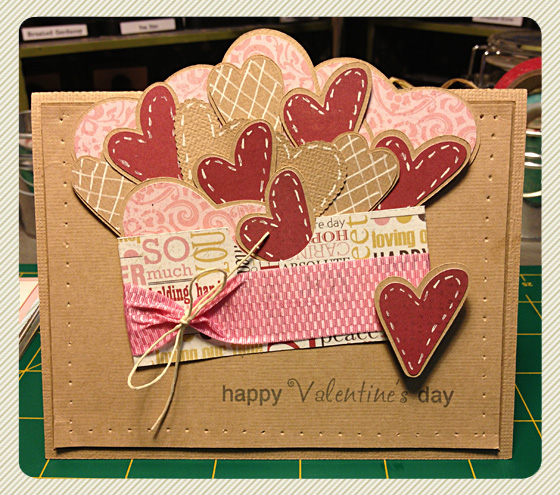 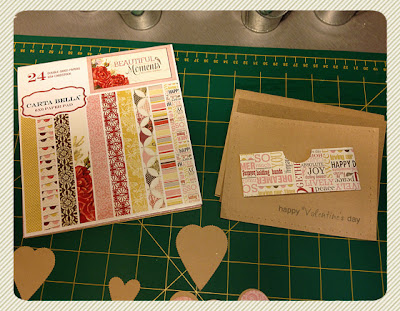 This whole card, apart from the ribbon and string was cut with the Silhouette.  I created most of the the pieces myself in the Silhouette Studio program.  The hearts were cut in two sizes, one slightly larger.  I used kraft coloured cardstock as my base for all pieces, except the pocket.  The pocket and the red and pink hearts were cut from the Carta Bella paper. 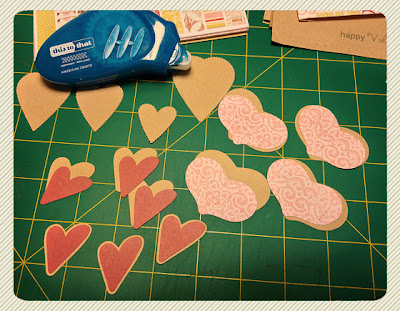 Assembling was the super easy part... glue small hearts to larger hearts, use a white pen and draw on patterns and stitches.  Punch holes into the top layer of the card.  Assemble the card layers and place pocket on the front.  Don't forget to wrap a piece of ribbon around your pocket before gluing down... I didn't and it was a pain to add it later :doh:. Place hearts into pocket... I used glue dots to keep them in place and stamp your sentiment.  I actually created my sentiment in Photoshop and printed it onto the cardstock using the Epson printer.
That's it... a cute Valentine's Card, made in record time thanks to the silhouette.

Her little face says it all, I think... 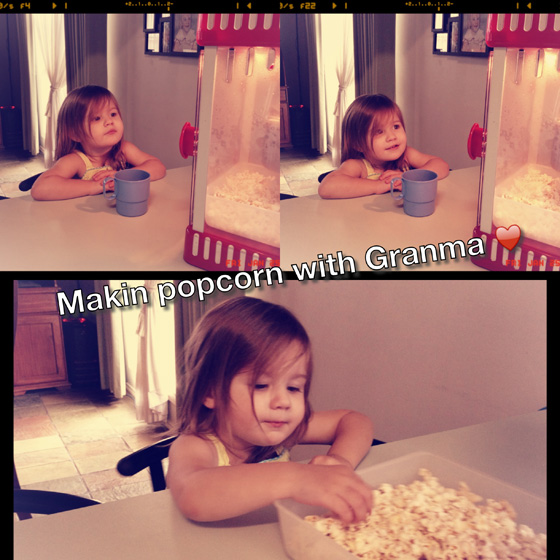 Have a great day!

Now as some of you already know I love my Silhouette Cameo!  Boy do I love it!  An awesome work horse when it comes to cutting the same shape a billion times.  Well maybe not a billion but you get my drift...  Just recently I was helping my Niece-in-law to be with her Wedding Invites and RSVPs.  As she loves butterflies and they are part of the theme she has picked for the wedding, we came up with this... 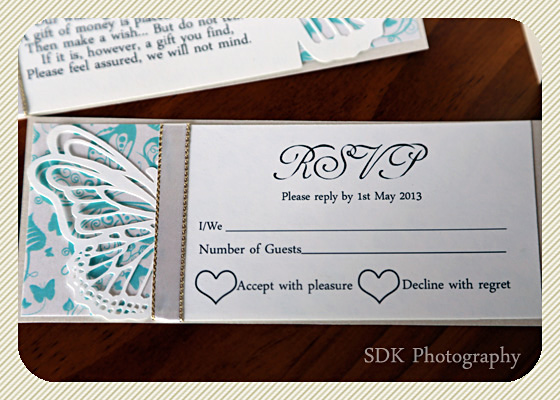 Isn't the Butterfly on the side gorgeous!  Isnt' the design intricate, there is no way I would hand cut something like that, let alone do it fifty odd times...lol. Cue the Cameo!!!
Now when you are doing something as important as Wedding Invites, using electronic equipment you make sure you had spare parts on hand, right... just in case... even though you know nothing could possibly go wrong...  let's just say I'm glad I did *wink*.
So I set up the cut file in the Silhouette Studio software so I would get 5 cut images per page.  As we had RSVP and Wishing Well notes, that meant we had to cut 20 pages altogether = 100 cut images...  Wow that's a lot of cutting by anyone's standard.
Everything was going smoothly and we had almost finished the RSVPs when my Cameo stopped working properly...EEEEEK!  It had cut half a page then skipped part of the design, then it would cut a bit, skip part of the design until it thought it had completed the job.  I was thinking maybe a software issue, so Cameo and Computer were turned off and back on. I tried cutting again with the same result...
I tried not to panic, instead I jumped on the net and Googled the issue. Thank goodness for Google what did we do before it :).  Anyway I found lots of articles on what to do if the images did not cut all the way through.  Most of this advice was to set the blade depth higher or do a double cut or replace the blade but no one seemed to mention the Cameo skipping parts of the design.  Still not panicking, but I was not enlightened at all as to what the problem was.  My options were to use a new mat and/or use a new blade.  I did both and hey presto my Cameo was back online and cutting properly.
But what was the issue?  Questioning minds need to know?  Firstly a new mat is super sticky which meant all those little itty bitty cut out bits from the design we used stayed on the mat...YAY!  I was not convinced it was just a not so sticky mat that caused the problem so I took a good look at the blade.  It wasn't until I compared it to a new one that I saw the problem. 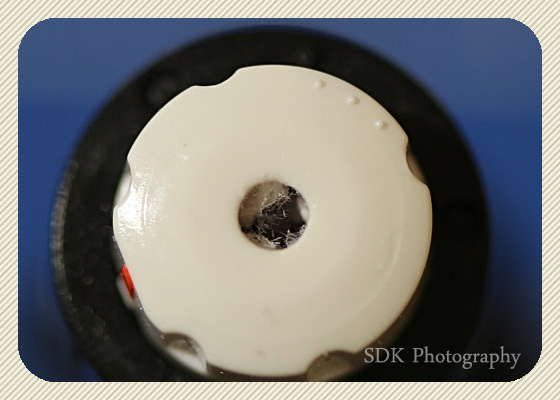 As you can see in the photo there is lots of little bits of paper in and around the blade. Paper fibers have become caught and compacted in the blade housing.  Doing so many little cuts on a not so sticky mat meant lots of loose paper fibers = a jammed blade.  No wonder the poor thing couldn't cut the design properly.
Tuesday's Tips -
1. When you have a lot of cutting to do made sure you have a back up mat and blade.
2. If you are cutting a design that has lots of little cut out pieces, remove the blade from the machine and blow out any paper fibres that may have collected on a regular basis.
3. If your Cameo skips or misses part of a design, change the blade and mat if it is not a new one.
Hope these tips help someone else if they have the same problem.

My title makes it sound like I just started the year and in a way that's what it feels like...lol!

December passed in a blur as it always does when I work extra and prepare for Christmas, but I kept up with December Daily photos and jotted down notes.  Just in the process of putting it all together, with photos to follow of course when I've finished.  While it was not my intention to complete my DD after Christmas as I really wanted to complete each day on the day (or there abouts) it is just how things worked out.  Still it gives me a goal for this year to have my DD foundation pages ready to go before December starts so I can keep up each day...hahaha!

I can't say the first two weeks of January have been any quieter either :)  Lots of family time, BBQs and enjoying the hot weather with swims in the pool.  This passed weekend we had a visit from a Nephew and future Niece, such lovely people - it was a wonderful weekend.  The weekend did have a purpose which kept C (future niece) and I busy... Wedding Invites...Eeeeeee!  We spent the whole weekend in my craftroom, chatting, gluing, cutting, printing and eating the odd biscuit or two....hehehehe.  We got all the invites for their wedding done including the RSVPs and little Wishing Well notes... a post for another day which will also have a couple of tips for using the Cameo when doing intricate cuts.  We then jumped on Pinterest and found so many cute things we could do for the reception, all pinned ready for another day of crafting ...so excited!

Today I had better catch up on the washing and ironing in between making a couple of Birthday Cards :)  So... Happy New Year ya'll it sure is shaping up to be an exciting one for us and hope I it is for you too!

SammyD
Australia
Married to my bestfriend, Mum to two adults plus Grandma to three.